With sales increasing 9.5% year-on-year to 4.02 million units (excluding two-wheelers) in 2017, the Indian auto industry was ranked the fourth largest globally, and the seventh largest manufacturer of commercial vehicles in 2017.

India’s two-wheeler sector is dominating the market in terms of volume. Why? A growing middle class and young population (comprising of millennials and Gen Z) are contributing to the two-wheeler growth here. Additionally, the growing interest of automotive companies in the rural market has further spiked growth in this area.

As a prominent auto exporter, India’s automobile exports have grown by 15.54% between April 2018 and February 2019. This figure is likely to grow at a CAGR of 3.05% from 2016 to 2026. And with several auto-focussed government initiatives—plus continued activity from automotive giants—the Indian two-wheeler and four-wheeler segment could be a world leader by 2020. Put simply, the automotive industry is fuelled up and ready to roll in India. 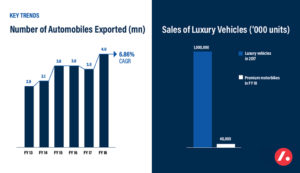 Domestic automobile sales also increased, witnessing a growth of 7.01% CAGR between 2013 and 2018 owing to 24.97 million vehicles being sold in 2018. Between April 2018 and January 2019, domestic sales across all categories was the highest in commercial vehicles at 22.79%, followed by 14.79% year-on-year growth in three-wheeler sales.

With premium motorcycle sales in India crossed one million units in 2018, BMW recorded a growth of 11% year-on-year in its sales in India having reached 7,915 units sold. Electric two-wheelers are estimated to have crossed 55,000 vehicles in 2017. 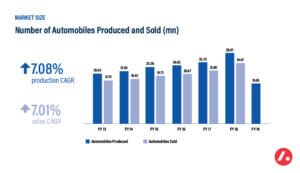 The automobile industry is backed by several factors, such as the availability of skilled talent at a low cost, highly efficient R&D centres, and cheaper steel production. As a result, the automotive industry provides great opportunities for folks in the labor force. 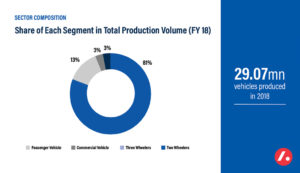 The volatility of India’s labor market remained high for yet another month. According to information from the Centre for Monitoring Indian Economy (CMIE), more than 1.5 million people lost their jobs in August. This brought the national unemployment rate up to 8.32 percent—erasing signs of positive job growth from July. It’s no secret that the…

Since the outbreak of the COVID-19 pandemic, remote work opportunities took off in India—and they haven’t slowed down since. According to a recent LinkedIn study, the percentage of paid job postings on LinkedIn that offered remote work in 2020 had grown 35 times compared to the beginning of the year. As of May 2021, the…

Countries around the world are experiencing a huge uptick in demand for qualified technology and software talent—and India is no exception. According to a report by Naukri JobSpeak, the need for candidates within the IT software and services sector was 55 percent higher in June than it was in January. So what has caused the…